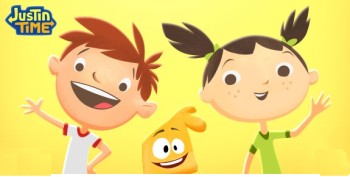 "Together, we're Justin Time!"note From left to right: Justin, Squidgy and Olive
Justin Time is a Canadian animated edutainment show aimed at the preschool crowd created by Brandon James Scott. It was produced by the Canadian animation studio Guru Studio, and was their very first original series. The show aired on Disney Junior in Canada (now Family Jr.), as well as PBS Kids Sprout, NBC, Qubo, and Netflix Kids in the US.
Advertisement:

The show focuses on a young boy named Justin, his Imaginary Friend Squidgy and their friend, a girl named Olive. In each episode Justin faces some type of problem or issue. Then Olive will take Justin and Squidgy on an adventure through different cultures, countries and time periods. The adventure somehow leads Justin to the solution to his problem. Then he and Squidgy return home to fix whatever triggered the adventure in the first place.

The show originally ran for 2 seasons and a total of 26 episodes between 2011 and 2014. In 2016 however, Netflix commissioned a new season of 13 additional episodes called Justin Time GO!. One of the major changes is the addition of a new character called Sammy, a new friend to Justin, who in Justin's imagination, acts as rival to him.

The series also has a official YouTube channel, with episode compilations on it.