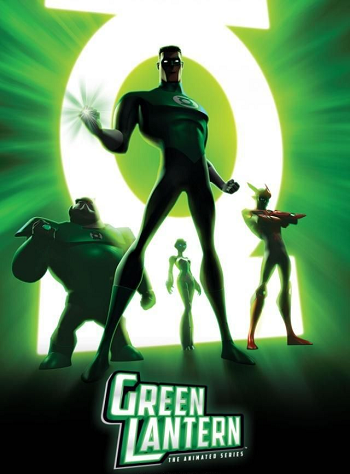 The CGI animated series based on the DC Comics superhero Green Lantern, created by a team headed by Jim Krieg, Bruce Timm, and Giancarlo Volpe. Made to cash in on the movie released in June 2011, it's the first CGI series Bruce Timm has ever worked on. The 44 minute pilot premiered on Cartoon Network on November 11, 2011, and the show made its official premiere as part of CN's DC Nation block on March 3, 2012. The second part of the first season began on September 29, 2012.
Advertisement:

The first arc deals with the mysterious deaths of the Frontier Lanterns; scattered, minimally-trained Lanterns who guard the very edges of Guardian territory. Veteran Lanterns Hal and Kilowog set out to investigate their deaths, coming into conflict with the Red Lanterns, who seek to destroy the Guardians in retribution for the destruction of their sector by the Manhunters. The second arc introduces the Anti-Monitor, who revives the Manhunters as his servants and plans to convert the entire universe to anti-matter.

Saint Walker (a Blue Lantern) and the Star Sapphires make guest appearances in the first arc. In addition, Sinestro was unable to make an appearance until the second half of the season due to his role in the movie, and Larfleeze, the sole member of the Orange Lantern Corps, also appeared later in the season.

Years after the series was cancelled, Young Justice (2010) would bring back elements of this series, with at least some of its events being canon in that show.