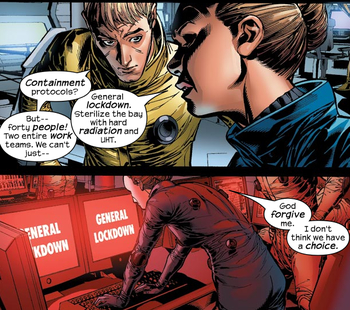 Moe: What are you telling us, we're trapped like rats?
Russ Cargill: No, rats can't be trapped this easily, you're trapped like... carrots.
— The Simpsons Movie
Advertisement:

There has been an outbreak of The Plague. Despite any quarantine protocols and maneuvers made to combat the spread of the disease, it's broken through every blockade, barrier and checkpoint. Curfews and emergency broadcasts are initiated. Carriers are mixing with the general population, and the breakdown of society is imminent.

The Powers That Be decide that the situation has gotten way out of hand, and extreme measures are taken in desperation — checkpoints open fire on civilians, regardless if they are carriers or not. The heroes of the story now find themselves at odds with the CDC-variants working in conjunction with the military, fighting to escape being Trapped in Containment with whatever danger provoked the quarantine.

Sub-Trope of Godzilla Threshold. Compare The Only Way To Be Sure, in which the entire population in the quarantined area is eliminated, as opposed to only those who are trying to escape. Contrast No FEMA Response, where a disastrous situation is bad enough that even this type of response would be justified (and maybe even accepted), but circumstances make it flat-out impossible. Very common in modern zombie stories, for obvious reasons.

After the Ray Sphere went off, the US Government has kept Empire City under lock and key at all costs.

After the Ray Sphere went off, the US Government has kept Empire City under lock and key at all costs.