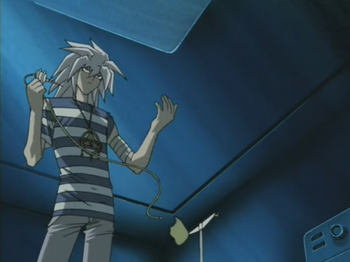 "Why is it that whenever someone wakes up in a hospital, the FIRST thing they do is pull the IV out of their arm? Maybe it was KEEPING THEM ALIVE!"
— Unskippable
Advertisement:

The hero — or villain — has been hospitalized. When they come to, they've got better things to do than sit in the recovery ward for hours and hours —the world's at peril! They dramatically yank off their IV as they're informed of another attack—especially if the bad guys are knocking down hospital doors, guns blazing. They've got no time to bleed. That this is against Doctor's Orders is always implied, and sometimes explicitly stated.

In real life, doing this has a pretty good risk of the wound getting infected, as it directly goes into your bloodstream, and requires some gauze, tape, and pressure to stop the bleeding, on top of whatever medicine in there being the medicine that's most likely beneficial to them. It also requires a gentle pull, not a yank.

May be related to Afraid of Needles, and represents an amusing subversion: there is no needle in an established IV, as it's only used to introduce the catheter into the vein, and is removed and safely disposed of immediately thereafter. The bit that stays is actually made of soft, flexible plastic(-y stuff).

Often followed by The Patient Has Left the Building. See also: Worst Aid, Television Is Trying to Kill Us, Artistic License – Medicine.