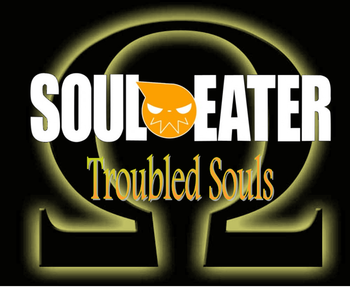 If you could change the world, how and why would you do it?
“Why can't I shake the feeling this won't be the first time I'll be contemplating about the future?”
—Death the Kid, Act 1 Chapter 1
Advertisement:

Soul Eater: Troubled Souls is a Soul Eater fanfic written by Grade-AMasterpiece, who goes on This Very Wiki by the handle of erazor0707, that can be best described as an Expanded Universe fic, bringing in a new conflict in order to shed light on various aspects of the universe. Set after the Baba Yaga Castle arc, the story starts on Monday, January 1st with Maka and company fighting the Monster of the Week in Madagascar. When Maka gives Lord Death the progress report, he suspects that the loose ends of the world's history may be getting tied up somehow, somewhere. From there on, new faces begin to show up and the plot begins to unravel bit-by-bit.

The story can be found on different accounts of the same name. His Archive of Our Own account

includes all the acts as well as other parts of the "Novus Ordo Mundi saga" consisting of itself, an ongoing side-story called Soul Eater: Saeculum

that details and/or explains things glossed over in the main story proper, and the prequel Soul Eater Zeta. His DeviantArt account

includes all that and artwork of the original characters who appear. Finally, the story is also on his FanFiction.Net account in separate stories Links Act 1

The author says it will be a long story. It has an extensive character page, is divided into Acts, and is further broken down into various Story Arcs as you'll see below.

After a period of dormancy, the author announced on both Acts that he will rewrite Act 1 almost wholesale in a new edition called "Act 1.5" and continue Act 2 from there.

Note: Some spoilers may be unmarked. It is generally recommended to read the story and then come here. The fic also assumes you read the manga and watched the anime.