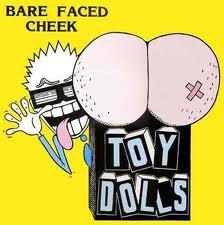 You call me a cheeky monkey.
Advertisement:

Ah, yes, the time-honored tradition of pulling down one's pants and displaying one's buttocks. While the term "mooning" has been in the English language for over 400 years, it wasn't until the late 1960's that it gained its modern slang usage.

Mooning is typically done for sheer, pointless defiance, to taunt an enemy, or simply for laughs. The general idea is to do it within full view of people who don't expect or want to see a pair of bare buttocks. Cheek Copy is a cousin of this trope that's less direct and can have the perpetrator be a safe distance from the victim with the same net result.

While this is often a male-oriented behavior, it's not unheard of for a woman to do the same. Of course, when a woman does this, it's often more for titillation than shock or offense.

Performing the act from the window of a moving car is perhaps the most common form in modern America. This solves the problem of a quick getaway while one's pants are undone. A popular variant is the "pressed ham", wherein the mooner shoves his bare cheeks up against the glass of a closed window.

In more unfortunate situations, the act of mooning may be followed by an Ass Shove.

While in fiction this is usually portrayed as harmless with no serious consequences (probably except for embarrassment), in Real Life, many jurisdictions will consider this actually illegal if done in public, with charges of public indecency or even second degree sexual assault.