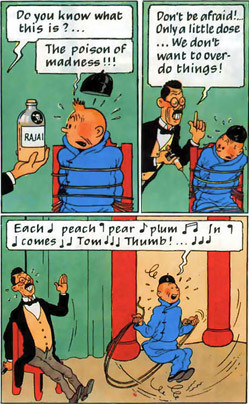 Despite being perfectly sane, a character is given drugs that make people around him think that he is insane. This is usually done maliciously and without the character's knowledge. Frequently done to get a character out of the way when killing them would be too messy, or simply to discredit them.

Often this would be maintained by having a caregiver giving the patient "medicine" to treat their mental illness, but in reality is dosing them to keep them insane. May be administered by Slipping a Mickey and/or Water Source Tampering. Can overlap with Go Mad from the Revelation if Higher Understanding Through Drugs opens the mind to secrets not meant for mortals to perceive.

Compare Psycho Serum where a character intentionally takes a drug to enhance himself, but it induces insanity as a side-effect; also compare Infectious Insanity where insanity is induced by contact with an already insane person, and Mushroom Samba for cases where a character is under the influence of hallucinogens (voluntarily or otherwise). See also Gaslighting, another way in which one character can make another seem insane.

See also Münchausen Syndrome and the "by proxy" variant.