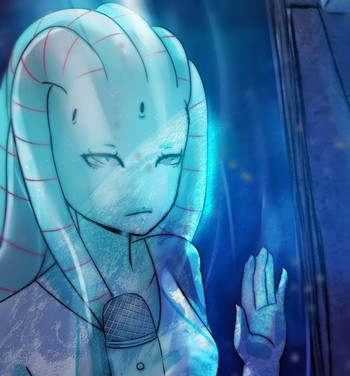 "Want to see the view? I don't want to overwhelm you..."
Advertisement:

This is by far her longest series to date, featuring extensive world-building and character development. The first episode starts out as an atmospheric ASMR where an 11ft tall alien woman attends to the viewer and runs experiments on them. It quickly becomes apparent that she is not all there in the head when she coldly tells you that your species may not meet her society's standard for sapience, and talks about wanting to eat you, slathering her tongue all over your face, even when she admits that her behavior would be frowned upon by her crewmates and employer. While she does eventually stop and admit to her romantic feelings for you, your troubles are far from over.

A playlist has been made, allowing viewers to watch the series from the beginning.

Tropes that apply to Alien Abduction Roleplay include:

Ackt: Aw! I kinda wanna take you out of these restraints, but that would get me terminated. I just want to take you out and hold you, you're so small!
Acktreal Domma: "Please don't leave me! I love you! I'm going to eat all of your organs, and your bones...."