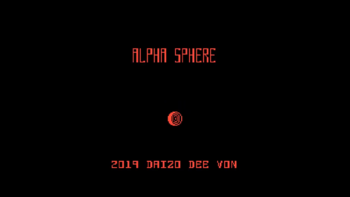 ALPHA SPHERE is a unique Super Mario World ROM hack and the 1st place entry of SMW Central's 2019 "Halloween Level Design Contest". Instead of the Mario characters, the hack has an original world and plot; you play as a woman named Norma on a mission to escape from Dr. Faux Andre, her demented husband, stumbling upon an ancient relic on the way.

The story takes place after an unspecified apocalypse has wiped out humanity, save for Norma and Andre. Residing in an abandoned factory, Andre wants to save humanity by procreating with Norma, but she is hesitant. He increasingly refuses to take no for an answer and tries to pressure her into it. One night, Norma attempts suicide, but fails, instead coming across an artifact called the Alpha Sphere. Andre claims this could be the key to saving humanity, and implores Norma to put it back where she found it. She can either obey... or set out to provide it a new home, and escape Dr. Andre once and for all.