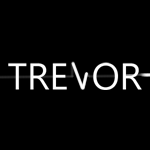 “This is the story of the day that Trevor finally died”
Advertisement:

TREVOR is a horror/slasher webcomic about the last day of the life of a man named Trevor, a leukemia patient. But there’s far more to it than that.

The final page went up on July 10, 2021, completing the comic (credits included). It can be read from the beginning here

Has no relation to the short movie named "Trevor".

Due to the nature of the webcomic, all spoilers here are unmarked. Proceed at your own risk.