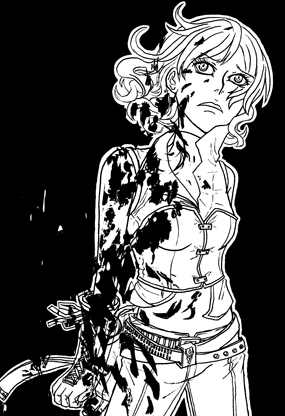 Our heroine, folks. She's not having a good day.
Advertisement:

is an ongoing futuristic horror webcomic created by Roxy Polk. An unnamed young woman wakes up in a strange medical facility, with no knowledge of who she is or how she came to be there. Spotted picking her way out from amongst the hundreds of sleeping bodies around her, she finds herself pursued by masked humanoids. She escapes to the roof only to find the ruined remains of civilisation spread before her. That, and a small army of soldiers aiming weapons at the facility...

The second chapter slows the pace down somewhat from the hectic opening chapter, and begins to fill in the details as the young woman, given the name "Karin", joins up with a ragtag military group struggling to survive the apocalyptic ruins...and the monsters that inhabit them...