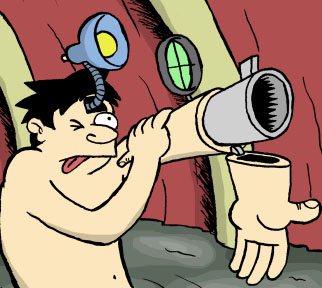 "Tells the story of a cyborg caveman. Or maybe a caveman cyborg."

A Web Comic by Riel Langlois and Dan Woodhouse, about a caveman that is accidentally given bionic enhancements by an alien research team.

Can be found at the The Duck website: Thog Infinitron

Thog Infinitron updates every Monday, just after midnight. The comic has inexplicably stopped updating. Ironically, the final comic posted features a fan of the comic itself endlessly click "refresh" waiting for the next update.