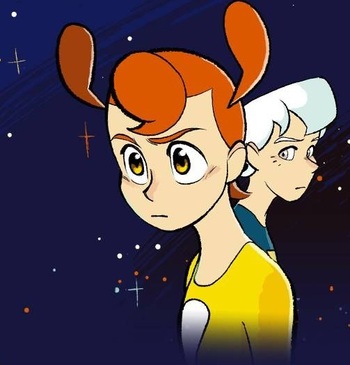 Amy is from a mining colony in deep space. Born with Synesthesia, Amy has always found that people come in 'Flavors.' Her mom is minty, her dad is hot chocolate, and her best friend is pineapple. After her father loses his job, her family is cryogenically frozen for the 30 year trip to Earth. Upon arrival, she is tired, unhappy and has much to complain about the strange new world she lives in and the friends she had to leave behind. After finally attending school and coming to grips with her new situation, she starts to open up and make new friends. It seems like Amy could enjoy a relatively normal life on Earth after all. And then she meets Oliver, a person with no Flavor.

Space Boy is a webcomic created by Stephen Mccranie, which can be read on Webtoons

, and paperback volumes are available to purchase. It started in March 2015 and is currently on its third story arc. The wiki can also be found here