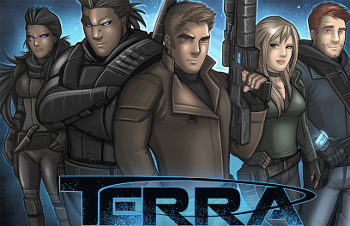 ◊
Our intrepid heroes. From left, Rei Antares, Agrippa Varus, Grey O'Shea, Alexis Hawke, and Rick MacFarlane.
"This war between our two planets is causing a lot of distress in the galaxy. With many species being caught in the middle. There are some very corrupt and powerful men that benefit from their suffering, and will fight to keep the war going. I ensure that those men are brought to justice."
— Agrippa Varus, page 12

is a science fiction webcomic by the husband-and-wife team Holly Laing and Drew Dailey, telling the story of guerrillas working to put an end to a war between Earth and the Azatoth that has pretty much every other spacefaring race in the galaxy caught in the middle. The comic started on March 20, 2009 and initially updated on Wednesdays. However in October 2013, when Holly announced that the comic would resume after a long hiatus for various reasonsnote Holly's health problems and her and Drew's wedding, she stated that they would now simply be updating once a week whenever she got the page finished.

The guerrillas call themselves simply the Resistance, and the comic focuses on four in particular. Grey O'Shea is a Friendly Sniper formerly of the United Earth Coalition Mobile Infantry. His entire unit was killed in an Azatoth ambush, but he was rescued by Resistance Agent Agrippa Varus, a former soldier for the Azatoth who fled The Purge of his family for his father's involvement in the founding of the Resistance. He's gruff, somewhat humorless, and terrifying in hand-to-hand combat, but he's also capable of great compassion. Lieutenant Alexis Hawke and Flight Engineer Rick MacFarlane are a UEC Space Fighter crew shot down by the Resistance and rescued by Grey and Agrippa. Alex, formerly an Azatoth slave, is tough and spunky and has a little bit of UST with Grey, while Rick is a friendly Non-Action Guy and the resident Mr. Fixit. At the moment Alex and Rick just want to get home (the latter has a family to feed back on Earth), and Grey and Agrippa are attempting to get them on a ship to Earth.