Literature / The Chronicles of Taras 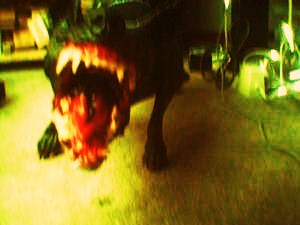 The Chronicles of Taras is a Creepypasta Horror Action Science-Fiction Diesel Punk Web Serial Novel by N. Somniack revolving around the exploits of Taras Jacobs, a 17-year-old girl with a mysterious past and a tendency to murder or permanently disfigure/disable anyone and anything in her way.

The story's narrator is Sandra Janssens, a girl who keeps the journals labelled The Chronicles of Taras, which have fallen into possession of N. Somniack, who provides the series with background research into Taras' demented exploits with often sarcastic and irreverent commentary.

The first story in the serial is Red Dementia. It features Sandra being shipped off to a bizarre summer camp named 'Camp Moric' in the middle of a black desert, featuring seven other tough-as-nails girls who are forced to work in mines all day, digging for scrap metal to further build on Camp Moric's grounds.

Soon Sandra becomes one with the group, who have all given each other nicknames (Sandra is christened "Jumpy" for her raw nerves and excessive fear), and they make a plan for escape. But Sandra's mind begins to fall into insanity through a kind of mind-damaging effect of Camp Moric's Grounds called the "Red Dementia" that only Taras Jacobs is immune to, and soon strange creatures called "Rakes"

begin to skulk around camp at night, leaving Sandra and her cabin-mates with either escape or certain death on their hands.

The episodes (journal entries) of the story go up every Tuesday and Saturday at 9 a.m. server time, often with updates on Taras/Moric's/other characters' backgrounds in between.

On December 28, 2012, N. Somniack announced he would re-tool the story and try to sell it to Kindle. The new story, he said, would have a different setting and new different elements, as well as less of a rambling, incoherent tone that is common with the red dementia parts of the story.

This creepypasta provides examples of: