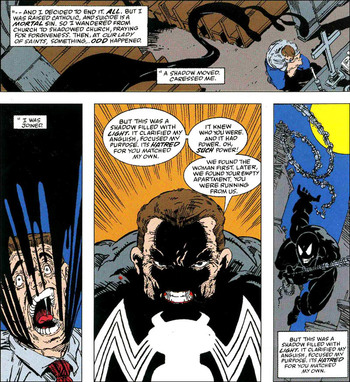 "Clothes make the people [and not the other way around]."
— A German Proverb 1 Which presumably omits tailors.

The hero character gets some sort of apparel or accessory that seems to be great and useful, but it's really unstable, sentient, evil (or at least mischievous in the way Muggles would consider evil) or otherwise damaging to its user's heroic nature.

In the case of a sentient, evil item, it often seeks to turn the hero to its own ends. Toward this goal, it begins manipulating the hero's mind. He becomes less sunny and more grim. He becomes less playful and more violent. Eventually the suit and or its wearer begin referring to themselves as "we".

In the case of unstable or dangerous items, various effects from Applied Phlebotinum can cause the same problems to happen as if it were a truly evil thing affecting its wearer.

At that point, the hero may very well realize there's a problem. Or the damage is done, and the hero's tipped over, and will have to be forcibly separated from his new item. In any case, whether the hero's willing or unwilling, don't expect removing it to be easy.

It needn't always be an article of clothing. It could be a gem or jewelry. In fact, they are often the worst offenders; they are ensorceled to whisper seductively to a prospective wearer, the better to get into position to take over the victim.

This trope has a fine lineage, sharing relations to Mask of Power, Artifact of Doom, Enemy Without, Evil Costume Switch, Evil Feels Good, Clothes Make the Superman, The Hat Makes the Man, Evil Makeover, and With Great Power Comes Great Insanity. The difference is that the person who ends up the maniac in question started out a good guy and had no idea that the article of clothing would drive them evil/insane. Super-Trope to Evil Mask. Compare Freaky Fashion, Mild Mind, Paint It Black (where the clothes the person was wearing transform because the person turns evil, rather than the person changing because the clothes were evil).