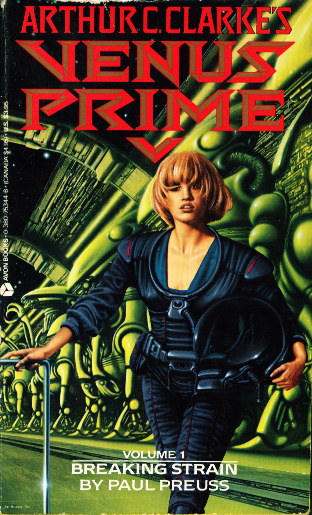 Her code name is Sparta...
"Does the word Sparta mean anything to you?"
— Opening line
Advertisement:

Venus Prime is a series of six science fiction novels written by Paul Preuss, based on stories by Sir Arthur C. Clarke. Each novel is based on a different Clarke story, and all together, they tell the story of Sparta, a young woman granted extraordinary abilities by the evil Free Spirit, a cult seeking to turn her into a messiah. Along the way, she solves mysteries for the Board of Space Control, an interplanetary bureaucracy.

Originally published starting in 1988, the series has fallen into obscurity thanks to its original publisher going under in 2006.