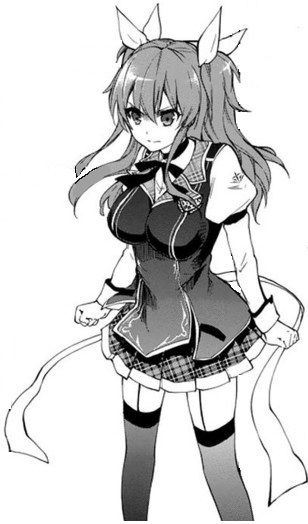 Her Royal Highness is not amused.
Advertisement:

Women have a variety of ways to show their indignation, displeasure, or what-have-you at something that offends them. In anime and manga, however, a girl has to do this without appearing threatening, mainly because the illustrator wants to convey that she's annoyed or irritated or objecting to what's going on without compromising her cuteness. Enter the Cute Indignant Girl Stance.

There is no in-universe justification for this trope. It solely exists for Rule of Cute, and the body language itself is meant to emphasize this: Her arms will be straight and her hands balled into fists with her wrists bent at ninety-degree angles so as to project her fists outward in opposite directions; her shoulders will be bunched up to help emphasize this. Meanwhile, her facial expression, while conveying annoyance, displeasure, etc., will vary depending on the level of gravitas (or lack thereof) in the scene. She may be bent forward slightly, or she may not.

This trope exists as a lighthearted way for a female character to use her body language to convey her irritation, indignation, or some other form of displeasure. Note that in-universe the female character's not trying to come across as anything; it's just the audience perceiving her as cute when she does this that makes her cute for doing so, simply because the illustrator thought she'd look cute this way.

Expect the Clingy Jealous Girl to do this as part of her schtick.