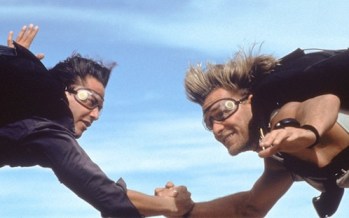 "Hey, kids, it's Trivia Time! with Demolition D+!'' First Question: How much prior knowledge is needed to operate a parachute for your first time in mid-air while jumping off the very tippy-top of an exploding building without landing and breaking your legs?! MORE THAN THIS FUCKIN' GUY!
Oh, and then I'm expected to believe that Socially-Awkward Sandy here can do it while holding someone bridal style? Okayyyyyyyy..."''
— Demolition D+ on

Parachuting is a precise science in real life. There is only a small window on any given jump to deploy one's parachute; too soon, and you could risk breaking a leg or veering too far from the drop zone; open too late, and you might not have enough time to cut away and deploy your reserve should the main canopy malfunction at such a low altitude.

Hollywood ignores this. In the movies, as long as you deploy your parachute before you hit the ground, you are A-OK. Doesn't matter when you pull it, or if you're carrying heavy baggage, or if you're upside down, or if the parachute is tangled. Parachute injuries simply don't exist. (At least unless it would be dramatic.)

Also note that in Real Life, first-time skydivers are always accompanied by either an experienced trainer who will be literally strapped to the newbie's back, or two trainers who will monitor the newbie and assist him/her on radio, or their chute will be opened automatically when they jump out of the plane by means of a static line. Acknowledgement of this is slowly making its way through to the writers/producers of Hollywood, but there are still plenty of times when the only training a newbie gets is being pushed out the door... usually because the plane is exploding/has zombies on-board/is being shot at. Maybe all at once.

This trope's prevalence can probably be traced to Rule of Perception. Real life HALO (High-Altitude, Low-Opening) jumps are basically this trope. And they're risky.