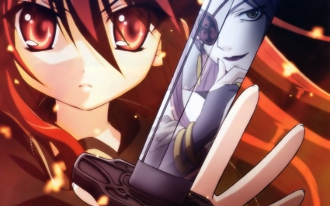 If a character regularly uses a sword of some sort, then the show's opening credits or Stock Footage will almost always include a shot of that character's face reflected in the highly-polished steel of the blade. Another common usage is to have the character's opponent(s) reflected in the blade as a reaction shot.

The characters in those scenes are facing each other, but unlike the Mirrored Confrontation Shot that shows them from a side, this shot allows us to see both characters' front faces. Without the reflection, we would have to see one of them from behind.

Remember that Tropes Are Flexible. This trope is usually done with swords, but any object that may show a reflection can be used as well. Sometimes even objects that are not very reflective.