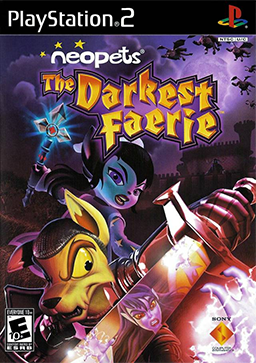 Neopets: The Darkest Faerie is a 2005 Neopets action-adventure game developed by Idol Minds for PlayStation 2.

The story is about the return of the eponymous Darkest Faerie, who was sealed away at the bottom of the ocean years ago but now threatens all of Neopia once more. It focuses on two characters: Tormund, a Lupe Farm Boy who joins the knights of Meridell, and Roberta, an Acara diplomat who dreams of being a sorceress. When the Darkest Faerie's influence spreads over nearly the entire world, only Tor and Roberta appear to be unaffected by this curse. Now Tor and Roberta unite and join forces to stop the Darkest Faerie's malicious revenge plot.

While the game received mixed to average reviews, due to having simple gameplay and a host of bugs and glitches, it retains a bit of a cult following of former Neopets fans.