There Are No Bedsheets 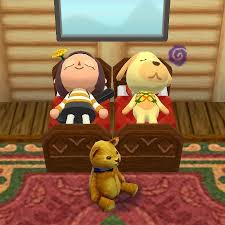 There is no nightwear either, apparently.
A Video Game Trope, usually seen in Role-Playing Games.
Advertisement:

Back in the 2D era, it was fairly easy to show characters getting into bed. One sprite for the back of the bed, one for the sheets or blanket, slot the character sprite between them. In fact, in countless such games the player can "lie down in bed" simply by walking his character into it from the side, at which point they look just like they're tucked in safely.

However, when games went 3D, players expected to see realistic bedsheets. This is nowhere near an easy task, as bedsheets need to curve realistically and be able to be sloughed off the bed when the character arises, something that's very difficult to do with polygons. This gave the developers three choices:

For many games, your hero will be lying in bed, but there will inevitably be no sheets or blanket on it; the hero may as well be lying on a slab of rock. The only exception may be when showing someone who is ill and not actually expected to get out of bed at all during the course of the game.

Compare No Flow in CGI and No Such Thing as Dehydration.