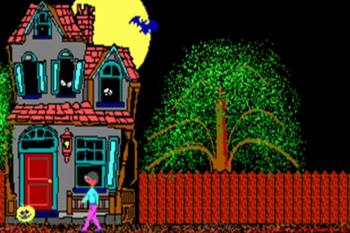 Seems like a nice house...
A short adventure game from 1990. You play Hugo in a quest to rescue your girlfriend from a house inhabited by monsters. Followed up by two sequels, Whodunit? and Jungle of Doom, and the basic premise was retooled as a Wolfenstein 3D clone called Nitemare 3D in 1994.
Advertisement:

There's also a film called Hugo that has nothing to do with the games.