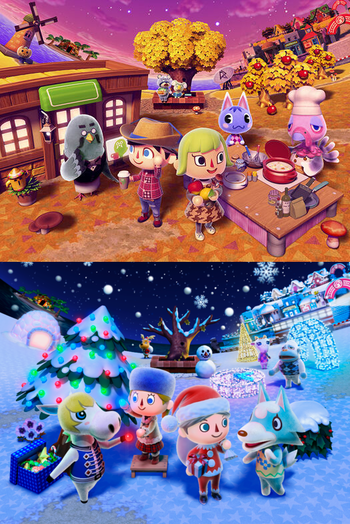 "God bless Mother Nature."
For stories taking place during any holiday, expect the weather to always be perfectly appropriate for the occasion.
Advertisement:

For example, on the Fourth of July, the sky is always going to be sunny and clear (for barbecuing and fireworks), and on Christmas, snow is essentially inevitable (unless you're in Australia). This makes sense considering those events happen early in American summer and winter respectively, but also seemingly ignores all the various, sometimes random factors that affect weather. Just because it snows in a certain day in a certain year doesn't mean that next year will be the same after all. This can lead to geographical inaccuracies if a specific location in the US starts exhibiting weather that very rarely or never actually materializes in that region for the sake of holiday atmosphere, such as snow in a place where it either doesn't snow or where it typically starts in January instead of December.

This mostly happens with Christmas, but Halloween is also a notable offender. Pick a Halloween Episode, any Halloween episode, and you'll realize quickly that it's always a nice night for trick-or-treating, despite the abundance of rainfall during the season. At best, you get a cloudy, windy night for some spooky atmosphere, but thunderstorms only show up if it's an actual horror story with a killer or monster set loose. Valentine's Day is another common case of this. Technically, it's a winter holiday and spring is over a month away, yet, if there's a Valentine's Day Episode, it will always be spring-flavored, despite the fact that many places average colder on Valentine's Day than on Christmas and have far more snow on the ground. And speaking of spring, Easter (a spring holiday) will always be sunny with lots of flowers in bloom — even in those years when it's in late March, before the plants have begun to regrow and there's still a chance of wintry weather, especially in the northern United States.

See Empathic Environment for weather that changes to reflect character actions. Related to Let There Be Snow, where someone asks for, and gets, Christmas snow in a usually non-snowy location. Dreaming of a White Christmas is a Sub-Trope.