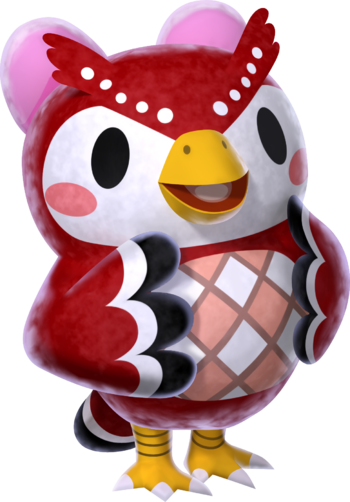 Hoo is the cutest little bird?
Owls are, to put it bluntly, adorable. They just are. There is something about those perfectly round shapes, those big eyes, and their beautiful fluffy plumage that immediately appeal to us. Not to mention the rather silly features like their Abnormal Limb Rotation Range, or their cute little hoots which have served so many "Who's on First?" jokes that it became its own sub-trope.
Advertisement:

Even if you are ornithophobicnote a fear that an owl lover would consider an "Absurd Phobia", but it is a real condition like most other phobias and must be respected, you can at least admit that they are rather Creepy Cute, or at the very least pretty rad.

There are two kinds of Cute Owls that mostly coincide with the two real-life families of owls:

Contrast Ominous Owl and Feathered Fiend, who are very much not like this. Compare The Owl-Knowing One and Noble Bird of Prey. Note that cute owls could still be evil, even the nerdy ones.

For other birds with similar connotations, see Doves Mean Peace and Bluebird of Happiness.

Owen and Cole watches a live stream of an owl's nest that has a mother and her babies.

Owen and Cole watches a live stream of an owl's nest that has a mother and her babies.