Western Animation / Legend of the Guardians: The Owls of Ga'Hoole 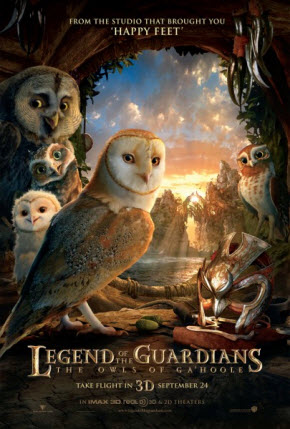 Legend of the Guardians: The Owls of Ga'Hoole is a 2010 animated film adaptation of Guardians of Ga'Hoole, a series of children's fantasy novels, directed by Zack Snyder and featuring the voices of Jim Sturgess, Emily Barclay, Abbie Cornish, Sam Neill, Helen Mirren, and Joel Edgerton, among others.

The story follows an owl named Soren (Sturgess). He and his brother, Kludd (Ryan Kwanten), are kidnapped by evil owls and taken to a sinister realm called St. Aegolius's, where Kludd is recruited into their Doom Troops and Soren is put to work in a massive owl sweatshop putting together pieces of a superweapon. At St. Aegolius's, a villain named Metal Beak (Edgerton) is building up his forces, an army called the Pure Ones, with the intent of conquering the world of owls.

Soren and a friendly elf owl (Barclay) he meets escape and go on a quest to find the Tree of Ga'Hoole, the legendary home of a race of warriors: the Guardians, who are sworn to fight evil.

In theaters and on home video, the film was accompanied by an original CGI Wile E. Coyote and the Road Runner cartoon; "Fur of Flying".

Not to be confused with Rise of the Guardians

Legend of the Guardians: The Owls of Ga'Hoole provides examples of:

Then when we get to the climax, we get this dramatic shot.