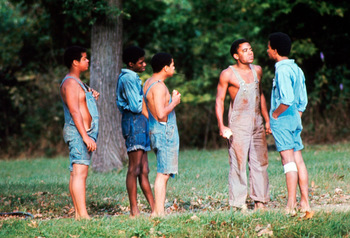 Newt: Are we gonna live here all our lives?
Sarah: Don't you like it here, son?
Newt: I don't know. I ain't been no place else.
Sarah: Well, I hope you won't have to live here all your life. It's not all good place, not all bad place either. Sort of like fruit on a tree; some good, some bad. Understand?
Newt: (nods his head)
Sarah: No matter if you go or stay, think of Cherokee Flats like that 'til the day you die. Let it be your learning tree.
Advertisement:

The Learning Tree is a 1969 coming-of-age drama film written and directed by Gordon Parks, adapted from his own semi-autobiographical 1963 novel about his life growing up in 1920s Kansas.

Newt Winger (Kyle Johnson) is a black teenager growing up in Cherokee Flats, Kansas some time between 1923 and 1929.note Note the Calvin Coolidge photo in the courthouse. Cherokee Flats has a fairly sizeable black community, and Newt's family is doing fairly well for themselves, owning their own farm. However, Newt still has to deal with racism and prejudice in the white community, like the condescending schoolteacher who tells him not to bother with college prep courses but to study to be a railroad porter. Or the viciously racist Sheriff Kirky (Dana Elcar), who believes he has N-Word Privileges and has a habit of shooting black men In the Back.

Contrasted with Newt is Marcus Savage (Alex Clarke), who is quite a bit more angry than Newt, and with reason. Unlike Newt's supportive, relatively prosperous two-parent home, Marcus lives with his alcoholic, shiftless father Booker (Richard Ward) in a shack, his mother having departed for parts unknown. One day, Newt, Marcus, and some of the other black teenage boys in town go to steal some apples from the orchard of local farmer Jake Kiner (George Mitchell). Unfortunately, Kiner catches them in the act and begins whipping Marcus. Marcus rips the whip out of Kiner's hand and beats him with it. This sets in motion a tragic chain of events.

Although African-Americans had been making movies for decades (see Within Our Gates, 1920), Gordon Parks was the first black director to be hired by one of the major Hollywood studios. He went on to direct the blaxploitation classic Shaft. The Learning Tree was one of the first 25 films admitted to the National Film Registry with the inaugural class of 1989.