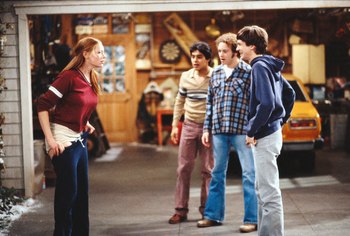 "Oh my God, Donna's wearing granny panties!"
"Of all the days to wear the underpants with the little rocket ships..."
— Calvin, Calvin and Hobbes
Advertisement:

It's bad enough for someone to be ridiculed for what they're wearing on the outside, but it's somehow more insulting to be teased for what you're wearing underneath.

This trope is when a character is teased for the kind of underwear that they are wearing, causing much embarrassment. There's any number of ways how what they're wearing under there can be known publicly, but it's usually revealed in a Pants-Pulling Prank or when their pants split. This is usually Played for Laughs, as the character teased just walks away with a bruised ego most of the time.

Types of underwear that end up being the target of this include:

Like all fashion styles, this is also subject to the Popularity Polynomial, depending on what was in style when the work was released. For example, briefs made a comeback in the Turn of the Millennium as the skinny fit jeans/pants rendered boxer shorts almost useless (and possibly helped by one Walter White) and character-printed underwear has come back with the rise of nerd culture in The New '10s. They even make underoos for adults now, we kid you not.

When the teacher calls him up to the board, he tries to delay as long as possible, but eventually goes up and moons the whole class.
Hobbes: That's why you're home early?
Calvin: Three teachers and the principal couldn't restore order.