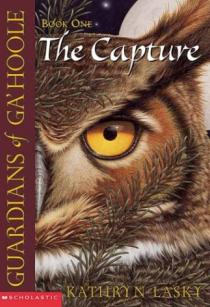 Guardians of Ga'Hoole is a children's fictional book series written by Kathryn Lasky and illustrated by Richard Cowdrey. Most of the main characters are owls, and the series is a cross between animal fiction such as Watership Down and epic fantasy. It was followed by multiple spinoffs and tie-in books.
Advertisement:

The protagonist for the majority of the books is Soren, a young barn owl. He is pushed out of his nest by his malicious older brother Kludd and then kidnapped by owl scouts from a mysterious institution called St. Aggie's Academy. He soon makes friends with an elf owl named Gylfie and together they resist brainwashing by the St. Aggie's owls. Soren and Gylfie draw on the legends of an order of noble owls called the Guardians of Ga'Hoole for inspiration. They eventually escape, but upon discovering that their families have disappeared while they were imprisoned in St. Aggie's, they decide to search for the legendary Guardians. Soren and Gylfie are joined by Twilight, a great grey owl, and Digger, a burrowing owl. All four of them, each of their lives impacted by St. Aggie's, form "The Band" and join the Ga'Hoolian owls.

Subsequent books deal with The Band's education and training in Ga'Hoole and also the rise of a group even more dangerous than St. Aggie's called the Pure Ones. The Pure Ones believe in the superiority of Barn Owls above all other owl species.

The Film of the Book, Legend of the Guardians: The Owls of Ga'Hoole, was released in September 24, 2010, by Zack Snyder and the guys who did Happy Feet.

This continuity consists of:

Guardians of Ga'Hoole provides examples of: