Film / Legend of the Fist: The Return of Chen Zhen 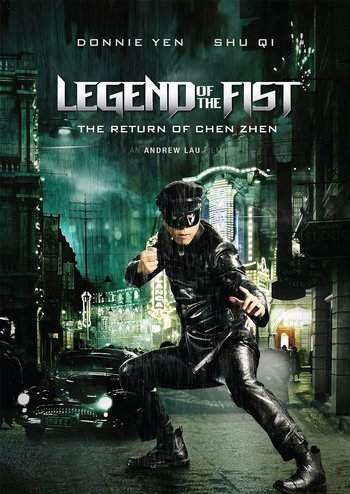 Legend of the Fist: The Return of Chen Zhen is a 2010 Hong Kong Martial Arts Movie directed by Andrew Lau, starring Donnie Yen as Chen Zen, the same character portrayed by Bruce Lee from Fist of Fury.

Taking place in an Alternate Continuity, Chen Zen had actually faked his death at the end of Fist of Fury (despite getting shot by a firing squad at the end of the film) and have since escaped to Europe. Eight years later, when the first World War broke out in Europe, Chen Zen made his way back to Shanghai, now under Japanese occupation. Joining the local resistance force, Chen Zen is determined to finish what he had started years ago, to liberate the Chinese from Imperial Japanese rule. Taking on the alias of "Masked Warrior", a mysterious black-clad hero, Chen Zen will single-handedly take on the Imperial Japanese, against the local military governor, Colonel Chikaraishi.