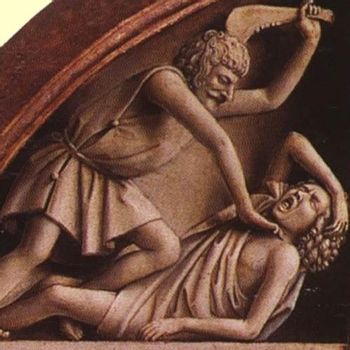 The brothers, "ironing" out their differences.
Image from The Ghent Altarpiece by Hubert and Jan van Eyck
"The LORD said to Cain, 'Where is your brother Abel?' And he said, 'I do not know. Am I my brother’s keeper?'
Then He said, 'What have you done? Hark, your brother's blood cries out to Me from the ground!'"
— Genesis 4:9-10, The Bible
Advertisement:

Sometimes Sibling Rivalry can get a little… intense. Maybe one who Missed the Call gets overly jealous that the other has become The Chosen One, maybe grand powers or knighthood run in the family and one just happens to have been tempted to The Dark Side, maybe one of them betrayed their master or father and the other has to stop him, or maybe it's just Because Destiny Says So, dammit. Whatever the case may be, now one's the hero and one's the villain, and they must do battle. Commence the angst.

For whatever reason, the older sibling is almost always the villainous one. Probably because being younger and less experienced makes the younger sibling the underdog, whom we are supposed to root for. And because the Aloof Big Brother always looks eviler. The major exception is the case of The Evil Prince, who is usually the younger of two princes, and who will do anything to make sure he succeeds their father instead of his brother (or in the case of the prince being the king's brother, to take the throne for himself directly).

It's not always siblings — Childhood Friends get to experience all the same woes from beating up someone they grew up with — but there's a certain poetry when they're actually related. For similar reasons, the traditional setup is for the duo to be of the same sex: either brothers or sisters.

In cases where the Cain turns out to be The Un-Favourite, he's likely to be viewed from a more sympathetic angle. Of course, this would partially also depend on the sibling's attitude in all this. Sometimes the siblings will become The Only One Allowed to Defeat You. If the hero isn't aware of the relation until late in the series, it's also a Luke, I Am Your Father. We Used to Be Friends and Evil Former Friend also count if the siblings in question were former friends with each other. Contrast Sibling Team. Also contrast Bash Brothers, where the two people (who may or may not be brothers) beat up other people instead of each other. When Cain is gunning for mom and dad instead of Abel see Antagonistic Offspring.

The trope title, of course, comes from the biblical story of the first siblings to exist. Cain as character has his own trope. See also Name of Cain. When There Is Another, compare Cain and Abel and Seth. May overlap with Big Brother Bully if said bully is truly malignant. If such a situation turns lethal, it's Sibling Murder. If not a Good vs. Evil situation, see Sibling Rivalry.

Not to be confused with the two recurring Character Archetypes found in the Fire Emblem series.