Western Animation / I Love to Singa 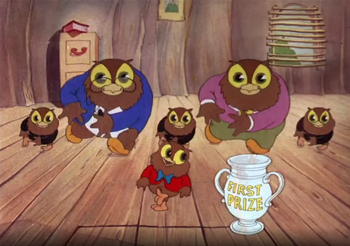 We bet you’ve got the song in your head just looking at this.
Advertisement:

"I Love to Singa" is a Merrie Melodies short directed by Tex Avery (or, as he is still credited here, "Fred Avery," with his animators, "Charles Jones" and Virgil Ross) that premiered on July 18, 1936.

The cartoon, very popular at the time, was designed to feature the eponymous tune by Harold Arlen and Yip Harburg, has a plot mirroring that of Al Jolson's most famous film, The Jazz Singer; un-coincidentally, Jolson (with Cab Calloway) had introduced the song

"I Love to Singa" provides examples of: