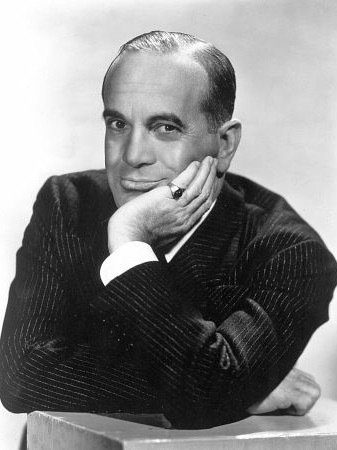 "After I die, I'll be forgotten."
Advertisement:

Born to a Jewish family in Srednike, Lithuania, he and his family moved to the United States in 1894, where they settled in Washington, D.C. Childhood events — namely, the death of his mother, his father's career as a rabbi and cantor, and he and his brothers' love of singing and theater — would go on to shape his future.

He got his start in a circus, and later performed in a vaudeville act with his brother and a third man, Joe Palmer. They toured the country for a while, before Jolson struck out on his own, soon settling in San Francisco. It was here that he began performing in blackface (that's him as the page image for the trope), which would more or less end up defining his career. His rise to stardom was kickstarted in 1911, when he was selected to appear in the musical comedy La Belle Paree. From that point on, he became a regular on Broadway.

As the 1920s rolled along, he moved on to Hollywood and sound films, eventually starring in what would be his biggest hit, The Jazz Singer. Beyond that, however, he failed to find much mainstream success. He would continue to act through World War II, entertaining soldiers, before dying suddenly on October 23, 1950 from a heart attack.

Jolson has a somewhat complicated relationship and reputation with the African-American community. On the one hand, whether intentionally or not he promoted and perpetuated racial stereotypes via his blackface performances (a fact that often gets mentioned and/or parodied in Warner Bros. cartoons of the era, be they Censored Eleven shorts or ones that have aired on television with those same Jolson caricatures edited out for their racial insensitivity, such as September in the Rain, Porky's Preview, or Swooner Crooner). On the other hand, he fought discrimination on Broadway, and promoted the first production of a Broadway play with an all-black cast, at a time when equal rights for all races was opposed or ridiculed. He and his films may have also given a number of black performers the break they needed to establish themselves in the music industry.

In any event, there is no denying that Jolson's work has been influential, and despite his prediction quoted above, he hasn't yet been forgotten; decades since his passing, his acts and persona are still familiar objects of homage and parody.