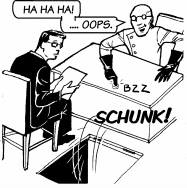 It can be difficult to get out of a tax audit.
Mr. Burns: Is that so? Well, I have the feeling you'll be... dropping the charges!
[he hits a button on his desk, causing a trapdoor to open several feet behind the inspectors]
Smithers: The painters moved your desk, sir.
Mr. Burns: Ah, yes...
— The Simpsons
Advertisement:

The villain sits in his lair, waiting eagerly to hear how his most recent plan was a success. Suddenly, a Mook comes running in. He looks frightened, and upset: He has bad news. The Mook delivers the news and winces.

The Big Bad sits a moment to comprehend this recent update, before bursting into rage. He angrily berates the Mook who has "failed me for the last time!" Convenient Trap Door time! The Big Bad pushes the button, the trap door opens... and it just happens to be right next to the Mook who was supposed to fall in. This is usually followed by a moment of awkward silence before the villain asks, "Do you mind?" The Mook will promptly jump into the trap door after this.

Of course, there are alternate varieties. Sometimes the trap door fails to kill its victims, and they continue to complain. Other times, the victim is too fat to slip through. Perhaps the intended victim can fly or otherwise easily escape from the trap. Or in true Looney Tunes style, it refuses to open until the villain decides to jump up and down on it. Regardless of how it plays out, if the trap door doesn't work the way it should, you've just met a Trap Door Fail. Note that the joke need not show where the trap door goes. Can lead to Fridge Logic if the villain's lair is underground.

"The Painters Moved Your Desk"

When Mr. Burns is told he'll be in big trouble if Homer doesn't get a college diploma, he insists that the inspectors will be "dropping" the charges, only to find the trap door is several feet away.

"The Painters Moved Your Desk"

When Mr. Burns is told he'll be in big trouble if Homer doesn't get a college diploma, he insists that the inspectors will be "dropping" the charges, only to find the trap door is several feet away.