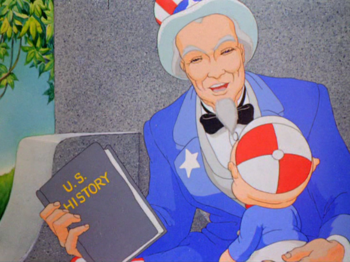 "...You don't know why you should learn the Pledge of Allegiance?"
Advertisement:

"Old Glory" is a 1939 Merrie Melodies short directed by Charles M. Jones, starring Porky Pig. This short is notable, if just for being the most un-Warner Bros.-like cartoon ever made. It's not loaded to the brim with gags or funny characters, and the subject matter is actually portrayed seriously.

Anyway, the short is centered on a childlike Porky Pig, who, uninterested in learning about the Pledge of Allegiance, lies down for a nap. He's then confronted by a vision of Uncle Sam, who proceeds to explain to Porky (or rather, his ghost) a history of Colonial America, The American Revolution, and the expansion to the Old West, with an allusion to Abraham Lincoln at the end and an excerpt from the Gettysburg Address. When Porky wakes up he is so enthusiastic about his country that he recites the entire pledge by heart.

Essentially, this short is to Merrie Melodies as Education for Death was to Classic Disney Shorts (though nowhere near as dark) — or maybe a less musical ancestor to Schoolhouse Rock!.

This short can be found, restored, on Looney Tunes Golden Collection Vol. 2.