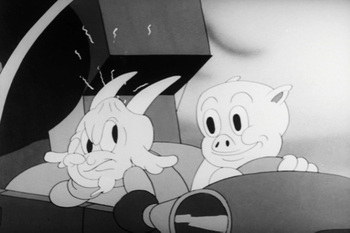 Porky and Gabby is a 1937 Looney Tunes cartoon, starring Porky Pig and being the debut of the short-lived character Gabby Goat. The cartoons director is credited as Ub Iwerks, but in truth it was ghost-directed by Bob Clampett and Chuck Jones.

The cartoon is centered on Porky and Gabby as they go out on a camping trip. It gets off to a rocky start due to some traffic trouble involving a truck and navigating some large hills with their heavily packed car. Once they get to the camping grounds and try to set up camp, it only goes further downhill from there.