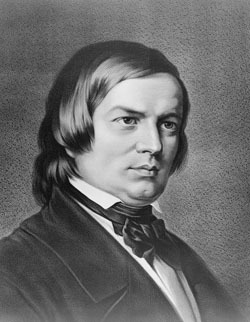 Having to give up his dream to be a pianist due to an injury, he concentrated on composing and writing commentaries on music. He was married to Clara Wieck, one of the most famous pianists of his time, after a long battle against the opposition of her father (who was his piano teacher). Besides his music, Schumann was known to be an enthusiastic promoter of Fryderyk Chopin in Germany and it was he who pronounced Johannes Brahms a genius.

Unfortunately, Schumann suffered from what today would be diagnosed as bipolar disorder. He tried to kill himself in 1854 by jumping into the Rhine river, but was saved by a passing fishing boat. Thereafter, he had himself committed to an insane asylum and never emerged.

He wrote mostly for piano. Many people will know "Träumerei" (Dreaming) from Kinderszenen (Scenes from Childhood) and Carnaval. He also wrote numerous song cycles, including his famous Dichterliebe (Poet's Love) and Frauen-Liebe und Leben (A Woman's Love and Life), five symphonies (four of them numbered), and a beautiful piano concerto