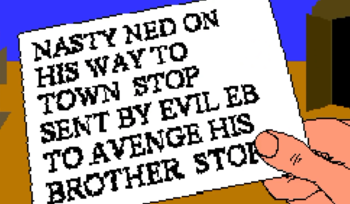 non-self demonstrating
This trope arose because Morse Code originally did not have a method to transmit punctuation beyond spelling it out (e.g. writing down "comma", or most famously, a full stop). Additionally, it lacks casing, meaning the entire message is in capital letters.
Telegrams charged by the word; therefore, the objective was to make the message with as few words as possible while still being clear. Marks of punctuation, such as the comma, period, dash, colon, etc., are not transmitted in telegrams unless the sender specifically requests it, and then they are counted and charged for, as one word each.
From the 1928 booklet, "HOW TO WRITE TELEGRAMS PROPERLY":

If you do not intend to stipulate that marks of punctuation be transmitted, write your message without punctuation and read it carefully to make sure that it is not ambiguous. If it seems impossible to convey your meaning clearly without the use of punctuation, use may be made of the celebrated word "stop," which is known the world over as the official telegraphic or cable word for "period."

Less well known, and therefore less common, is the usage of the word "query" to indicate a question mark. Consider this telegram exchange between MGM executive Roger Caras and Arthur C. Clarke that led to the production of 2001: A Space Odyssey: