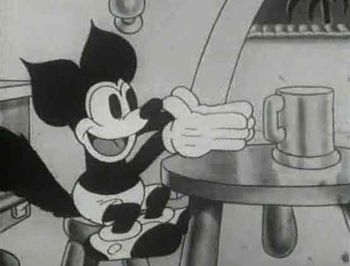 "Lady, Play Your Mandolin" is a 1931 theatrical cartoon, the first of the Merrie Melodies series of short subjects, and the solo directorial debut of Rudolf "Rudy" Ising. It was intended to be the first of a series of animated music videos that Warner Bros. would use to promote its newly-acquired music library having acquired Brunswick Records and some music publishers one year earlier. They even used a high-profile dance orchestra such as the one of Abe Lyman. The short has a strong Disney influence in its animation, not surprising since Harman and Ising were former employees of Walt Disney (and would, indeed, work for him again on one occasion as independent contractors).

The fairly loose plot takes place in a desert speakeasy set during Prohibition, where the Funny Animal patrons have a massive beer party and sing "that song of sin". Mickey Mouse lookalike Foxy promptly arrives and the fun really begins! Light on plot, but heavy on gags and sheer audacity (with a dose of swinging music), Lady was a smashing debut for the Merrie Melodies, helping launch it forward as a flagship series for decades, up to its Dork Age end in 1969.

, and while only a time-edited version was included on Cartoon Network's special ToonHeads: The Lost Cartoons (which can also be found as a special feature on the first volume of The Looney Tunes Golden Collection DVD set), the full, uncut version has made its way onto the Little Caesar DVD, as well as the Thunderbean DVD collection "Attack of the '30s Characters".

This film is also notable for being the first Looney Tunes cartoon that future director Bob Clampett worked on. He got his start on the series as an assistant animator on this film.