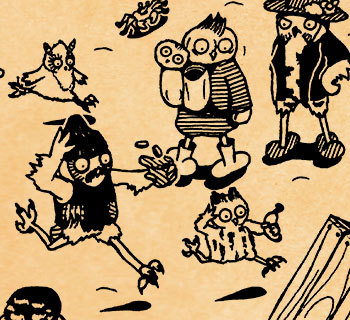 Owls and their baffling, yet fun-to-look at antics.
Realm of Owls

is a comedic open-ended gag-per-day webcomic about owl people living in a fantasy realm. The comic's creators, Gheralf and Vayandil, act as characters in the owl society, working as fictional documentarists who make comic strips to introduce various aspects of the owl people's world: how their uniquely silly culture works, why they named their largest city Buffet, who has the power in the city and what creatures and equally weird cultures share the world with them. The owls' off-the-wall behaviour and simple outlook on the world can also be interpreted as lighthearted satire of human life and habits.
Advertisement:

Although Realm of Owls has a documentary-like narrative without a particular main cast, the creators themselves may occasionally turn into main characters when they embark on a journey.

Realm of Owls started in May 22, 2016. It became a part of the SpiderForest webcomic collective in 2017.

Realm of Owls contains examples of: