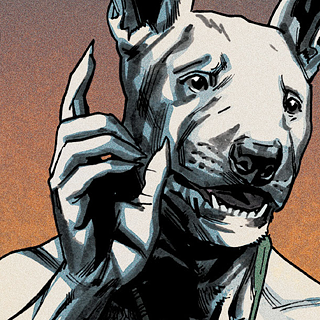 A common design choice for Funny Animals and other characters on the Sliding Scale of Anthropomorphism is giving them human-like hands (in spite of their apparent lack of proper wrists). However, their feet (and, perhaps, other parts of their body) often remain unchanged, resembling the feet, fins, flippers and hooves of their original species.

Quite frequently the hands will be four fingered (three fingers and a thumb). This is due both to cartoon drawing conventions of Four-Fingered Hands and the fact that cats and dogs have a "dewclaw" as their fifth digit, making their forepaws look superficially like they only have four digits.

Compare Feather Fingers, where animals retain their original anatomy but can use their forelimbs as hands anyway. Related to Humanlike Foot Anatomy.