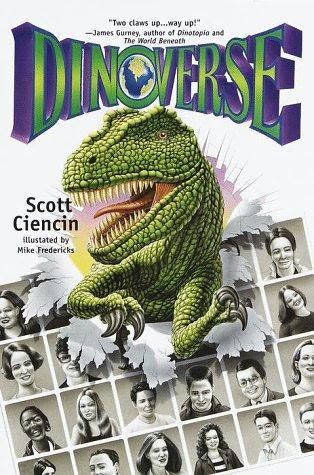 A Young Adult book series, which is in short, about junior high students who get transported back in time and turned into dinosaurs.

Written by Scott Ciencin, and published rapid-fire between 1999 and 2000. One just called Dinoverse came out first, then was later divided into I Was a Teenage T. Rex and The Teens That Time Forgot. After that came Raptor Without a Cause, Please Don't Eat the Teacher, Dinosaurs Ate My Homework, and Beverley Hills Brontosaurus. Each pair of books has its own set of characters, though the third pair has Mr. London from the second set and Bertram from the first return.

The setup for this fantastic premise involves Teen Genius, Bertram making a memory interpreter device for the school science fair. His machine somehow has the ability to transport people's minds back in time into the bodies of dinosaurs.

The first pair, I Was a Teenage T. Rex and The Teens Time Forgot, (later re-released as a single volume)has Bertram and three other students sent back to the late Cretaceous period. The three other students, Mike, Candayce, and Janine get changed into a Tyrannosaurus rex, a leptoceratops, and a quetzalcoatlus, respectively, and Bertram becomes an ankylosaurus. They have to trek across the country to get to a certain point or risk being stuck in the Cretaceous forever.

The second pair has Will, Zane, Patience, and their teacher Mr. London get sent into the mid-Cretaceous and possess a denonychus, a type of brontosaurus, an acrocanthosaurus, and a hypsilophodon, respectively. Their task involves an amber key and preventing some kind of extinction event.

In the third set the formula changes. Now a whole horde of middle schoolers are sent back along with the MIND Machine. The main characters this time are Bertram again, new kid Aaron, JD "Judgement Day" Harms, and Claire. They take the bodies of a pair of brother dilophosaurus, a small apatosaurus, and a carcharodontosaurus. They have to survive, try to fix the machine, and worry about a new plot involving alternate dimensions.