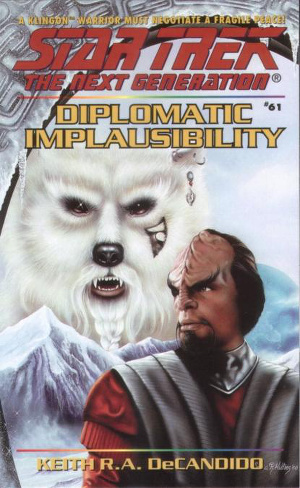 A book in the so-called Star Trek Novel Verse. It's noted for being the first novel to feature the I.K.S Gorkon, which would go on to feature in Star Trek: Klingon Empire.

200 YEARS AGO: The expanding Klingon Empire found a frozen world rich in deposits of the mineral topaline. They named the planet taD - Klingon for "frozen" - and they called the people jeghpu'wI'; conquered.

FOUR YEARS AGO: The Klingon Empire invaded Cardassia, breaching the Khitomer Accords and causing a break with The Federation. On taD, depleted Klingon forces were overthrown in a small coup d'état, and the victorious rebels took advantage of the disruption to appeal for recognition from the Federation.

NOW: The Klingons have returned to taD and re-established their control. But the stubborn rebels insist on Federation recognition. A solution to the diplomatic impasse must be found, a task that falls to the Federation's new ambassador to the Klingon Empire: Worf. Worf thinks of himself as a fighter, not a negotiator, but the Federation disagrees. Now, for the sake of the Federation and the Empire, a Klingon warrior must weave a fragile peace out of a situation ripe for war.
Advertisement: