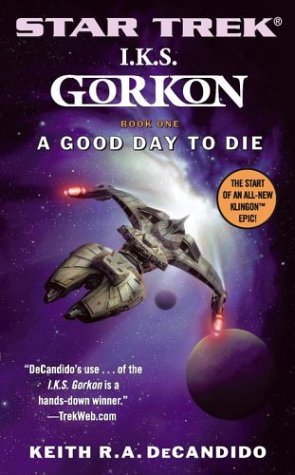 A novel series and part of the Star Trek Novel Verse. Written by Keith R.A. DeCandido, it centres on the Klingons and follows the adventures of Captain Klag, commander of the Klingon Defense Force vessel IKS Gorkon.
Advertisement:

There are currently four books in the series proper, though Klag and the Gorkon, along with many of the other characters, were actually featured in several prior novels before being promoted to their own series. Said series was originally named Star Trek: IKS Gorkon. Three Gorkon novels were released before the series was renamed Star Trek: Klingon Empire for the release of the fourth novel, A Burning House. The new title is an attempt to re-brand the series, allowing exploration of the entire Klingon Empire, though still through the eyes of the Gorkon crew.

Star Trek: The Brave and the Bold, book two and Diplomatic Implausibility also feature the characters of this series (and can now be considered prequels of a sort). Plus, Klag and his crew make cameos in the Star Trek: The Next Generation Relaunch and A Singular Destiny.

Short stories tied to the series include: