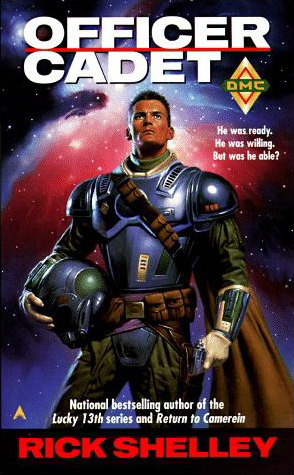 The Dirigent Mercenary Corps is a series of Military Science Fiction novels by Rick Shelley that follows the career of Lon Nolan, an officer in the eponymous PMC.
Advertisement:

Having been washed out of Earth's Military Academy on purpose so that he wouldn't have to go into State Sec, Lon winds up on Dirigent, a planet whose primary business is supplying weapons and mercenary armies to the galaxy at large. He's granted a commission as an officer cadet, but the DMC does not allow you to command until you've seen a tour of duty. It's a waiting game until the DMC gets a contract for a battalion-strength job to put down a rebellion on some rock in the middle of nowhere.

The books cover a broad span of years, following Lon as he rises from an Ensign Newbie to a Colonel Badass. They've received critical praise for their realistic depictions of life in a military unit (Shelley was a US Army veteran).