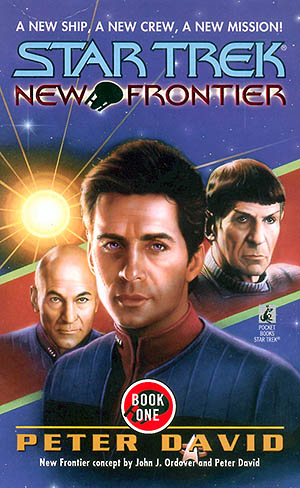 Star Trek: New Frontier is a series of novels from the Star Trek Expanded Universe written by Peter David. Set contemporaneously with Star Trek: The Next Generation, it follows the most badass captain in Starfleet history, Captain Mackenzie Calhoun, and his rather unorthodox crew in their journeys of Sector 221-G, Thallonian Space. The Thallonian Empire has fallen, and Calhoun and crew have been sent in to show the flag, and hopefully get the region back on its feet.

The series uses a combination of original characters and guest stars from the TV series. Other than borrowing some one-shot characters, there is little connection betweeen this series and Star Trek Canon. This fact allowed a freedom to let characters grow, change and even die years before the mainstream Trek lit settled into a more inventive phase (which was not allowed to fully let loose until after Star Trek: Nemesis). Basically, New Frontier was ahead of its time by Trek standards. There is also a very strong continuity to the stories that is nigh impossible with a series written by many authors, as David has written every novel and most of the short stories in the series. Many of the earlier books have a very strong Soap Opera feel to them as well, something that is pretty much unique in the Star Trek universe.

The Excalibur crew consisted of:

Additionally, the first three Star Trek: The Next Generation: Starfleet Academy books focus on characters who would later appear in this series. In fact, many Star Trek Expanded Universe novels make a Continuity Nod or three to the series. It rarely reciprocates (Except for a few cameos in other Peter David-written Trek novels), and later books offer different fates for certain characters than the "mainstream" novel continuity, but New Frontier can largely be counted part of the mainstream Star Trek Novel Verse through Broad Strokes, due to the sheer number of references and cameos.