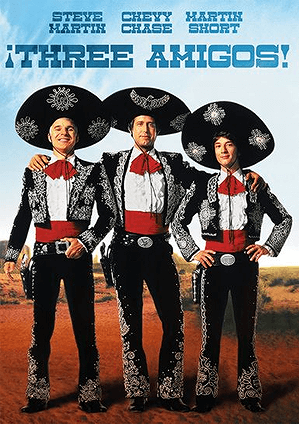 ¡Three Amigos! is a 1986 comedy film directed by John Landis. Dusty Bottoms (Chevy Chase), Lucky Day (Steve Martin, who also co-wrote the script with Lorne Michaels and Randy Newman - yes, that onenote Newman also did the original songs), and Ned Nederlander (Martin Short) are a trio of actors who are hired to protect a small Mexican village from bandits, Magnificent Seven-style — the villagers don't realize they're just actors, and the Amigos don't realize it's for real until it's nearly too late. Hilarity Ensues.

Not to be confused with the Disney film The Three Caballeros. note  Ironically, this film's working title was in fact "The Three Caballeros." Distinct from the trope called ¡Three Amigos!. Compare with Galaxy Quest, which has the same basic plot as this, but IN SPACE!