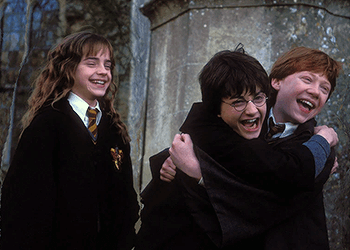 "We're three caballeros
Three brave caballeros
They say we are birds of a feather
We're happy amigos
No matter where he goes
The one, two, and three goes
We're always together!"
— Legend of the Three Caballeros theme
Advertisement:

Romance will be explored. A Last-Minute Hookup could almost always be expected between The Hero and a sidekick. More recently writers are pairing the sidekicks together. It probably won't turn into a Love Triangle because they are primarily friends. Any romance is secondary.

The two sidekicks are almost always the Secret Keepers in a Wake Up, Go to School, Save the World setting. This is an attractive setup for many writers, because it gives the main character a person of each gender to interact with easily.

Most prevalent within American shows directed at children and tweens, where writers conspicuously try to keep their cast as limited as possible. Anime tends to add a fourth member, closer to one of the sidekicks than The Hero. They might also get a team expansion later, but the trio will always be front and centre and be treated like the "real" heroes.

Quite often the With a Friend and a Stranger dynamic will be present.

Is often Super-Trope to Two Guys and a Girl, Two Girls and a Guy. Compare Token Trio. Contrast with the all-female Sister Trope, Beauty, Brains, and Brawn.

Terrible Trio is the villainous equivalent: The leader will be more bossy, and the sidekicks dumber and interchangeable.

Not to be confused with the comedy film, which, by the way, is the Trope Namer. Or that one Disney film some people remember.