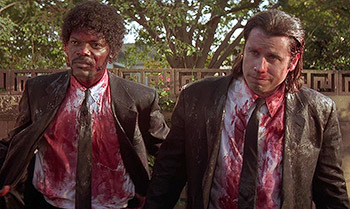 "But, Mister Croup, we hurt people. We don't get hurt."
Mr. Croup turned out the lights. "Oh, Mister Vandemar," he said, enjoying the sound of the words, as he enjoyed the sound of all words, "if you cut us, do we not bleed?"
Mr. Vandemar pondered this for a moment, in the dark. Then he said, with perfect accuracy, "No."
— Neverwhere

"Do you think we should explicate ourselves, Mister Rope?"

"I do, indeed, Mister Liche. Salutations, reader. I am Mister Thaddeus Rope, a man of the hatchet, as you might say, and this is my companion, Mister Clive Liche, a personal exsanguinator."

"May I continue with the expositionizing, Mister Rope?"

"You certainly may, Mister Liche."

"Alright then, reader, you may notice something familiar about us. We may talk funnywise, yes, and one of us may have a bit more smarts than the other. We're independent constrictors, y'see?"

"That I did, Mister Rope, thank you. Now, because of our potential, many writers use us in various forms. Don't they, Mister Rope?"

"They do indeed, Mister Liche, they do indeed. In fact, that's why we're here, because so many writers like to use us and our penchant for exposition and execution."

"And because of our killing people, right, Mister Rope?"

"No, Mister Rope, I never did like maths. Sleep tight, reader."

Those Two Bad Guys are a pair of bad guys who not only provide bloodshed, but also exposition in the form of conversation between them; not to be confused with Those Two Guys, though the two aren't mutually exclusive. They are usually foils for each other; commonly Brains and Brawn, and sometimes Red Oni, Blue Oni. They probably also look different, in such ways as Fat and Skinny or Salt and Pepper. When they show up in a video game, you can usually count on the player facing them as a Dual Boss at some point. Can also be a Big Bad Duumvirate.