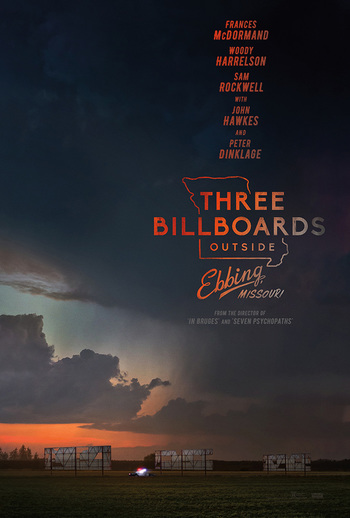 "All this anger, man. It just begets greater anger."
Raped while dying
And still no arrests?
How come, Chief Willoughby?
— What the three billboards say
Advertisement:

Months after her daughter Angela (Kathryn Newton) is brutally murdered, Mildred Hayes (McDormand) buys the advertising rights to three billboards outside Ebbing, Missouri and broadcasts the police department's inefficiency at finding any leads on the case. This puts Mildred in a town-wide controversy concerning her words against the recently cancer-diagnosed Police Chief Bill Willoughby (Harrelson), who is also fiercely backed by the angry, racist Officer Jason Dixon (Rockwell). Determined to keep the case in the public eye, Mildred loses favor with the townspeople as she continues to harass the police department, fueling a war that starts to take a violent turn.

Mildred: Dixon?
Dixon: Yeah?
Mildred: You sure about this?
Dixon: About killin' this guy? Not really. You?
Mildred: Not really. I guess we can decide along the way.